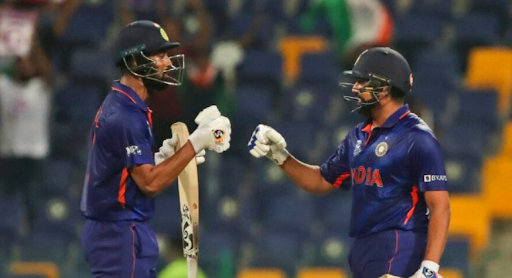 India fought back to show some tenacity in their success against Afghanistan after playing average cricket against Pakistan and New Zealand in the first two games.

On Wednesday, Virat Kohli and his team breathed a sigh of relief after defeating Afghanistan by 66 runs in the current T20 World Cup in the UAE and Oman. The Men in Blue needed to win by a wider margin against Mohammad Nabi and his squad after losing their first two games to Pakistan and New Zealand. Team India acted immediately, and as a result, they successfully improved their net run rate.

After being given the opportunity to bat first, the Indian openers got the game off to a flying start. KL Rahul (69) and Rohit Sharma (74) put on a huge 140-run first-wicket stand, and fast cameos from Hardik Pandya (35*) and Rishabh Pant (27*) helped India reach 210 for 2 in 20 overs.

On the other hand, Afghanistan's response was shaky, to begin with. They were reduced to 144 for 7 after losing a couple of wickets at a score of 13. Karim Janat, an all-rounder, stayed undefeated with 42 points and was his team's leading scorer.

However, former India cricketer Virender Sehwag asked the team to keep the same approach when facing tough opponents and strong teams. He stated that even if India lose, the same positive body language that they observed today should be maintained while playing against large opponents. He also suggested that instead of submitting, the team should put up a good fight.

Kohli's squad will now face Namibia and Scotland in their next two matches, both of which they must win by larger margins. Nevertheless, they remain reliant on New Zealand's next match against Afghanistan.

India can only advance to the semi-finals if Afghanistan defeats New Zealand, regardless of the margin. The loss of the Black Caps would assure India's victory, as the Men in Blue had already defeated Scotland and Namibia, as well as Mohammad Nabi and his team on Wednesday in Abu Dhabi.